by rats_eyes
I've been itching to make a Flanders Red for ages, as this is one of my favourite styles. I was going to wait until I had emptied a large glass carboy which has been nursing a lambic for over a year, but couldn't wait any longer. I ordered a new carboy (PET this time) and decided to get this one going.

I looked at a load of recipes in different books and cobbled this together...

I aimed for a one hour mash at 70c, but undershot a bit and hit 68c. Hopefully this will still provide enough unfermentable sugar for the bacteria to feed on. I topped up the tun with near boiling water for ten minutes as a form of mash out, but the limited room in the tun meant that this still only reached 72c.

I boiled for 150 minutes in the end. My boil off rate has been quite unpredictable, so I usually follow the volume of liquid in the boiler rather than the clock. Hops are minimal, so the bacteria can get on there work.

I ended up with an OG of 1.066. Higher than planned, oh well. As I forgot to calibrate my new fermenter before filling it with beer, I don't know the precise volume that I've collected. That was a bit of a silly mistake, as calculations for batch priming will be difficult later on.

I pitched one vial of WLP665 Whitelabs Flemish Ale (a blend of Sach, brett, pedio and lacto) and dregs from a bottle of Almanac Dogpatch Sour. Fermentation was slow to get going, so I ordered another vial of WLP665. By the time this arrived a pellicle started to form. I pitched the second vial three days after making the beer and fermentation started to kick off overnight. I've now got a healthy krausen and we're off!

6 days on and activity is well underway. 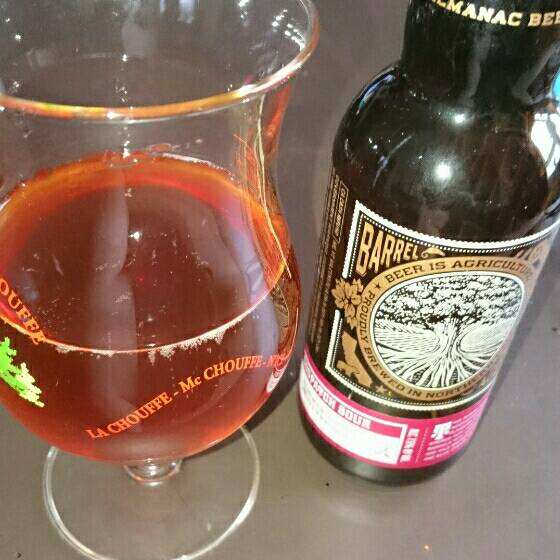 Here's where some of the bacteria came from.

by StevieDS
Nice one, this is another style on my to-brew list. I just need to talk the Mrs into moving somewhere with plenty of storage space, an apartment just doesn't suit sour beer brewing

How long does this one take before ready to drink?

by rats_eyes
I know what you mean. It would be great to build up some stock for blending, but I just don't have the space.

I'm expecting this to take 18 months or so, but will see how it goes. I'm hoping that the double pitch of bacteria and keeping it in primary will help it on it's way

by rats_eyes
This one went south after about 6 months, started to taste like a mixture of TCP and plasters, which I (possibly incorrectly) put down to chlorophenols. I wonder if I missed out campden tablets when I was preparing the water, leaving chlorine to react with the phenolic belgian yeast? I let it run for a few more months, but that flavour was going nowhere. It went down the sink. I'll probably try something similar eventually, though I'll be simplifying my recipe a lot.
All times are UTC [ DST ]
Page 1 of 1
Powered by phpBB® Forum Software © phpBB Group
https://www.phpbb.com/